This week we have been pretending that we are newspaper reporters. We went back in time to when the fire of London started and interviewed Samuel Pepys. He told us that it was his idea to blow up the houses to try and stop the fire. We then used his quote in our reports. We also made sure that the reports included our opinion. Some of us are of the opinion that the fire was a good thing because it killed the rats and therefore the black plague and others think that it was a bad thing because people died. 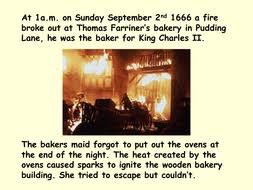